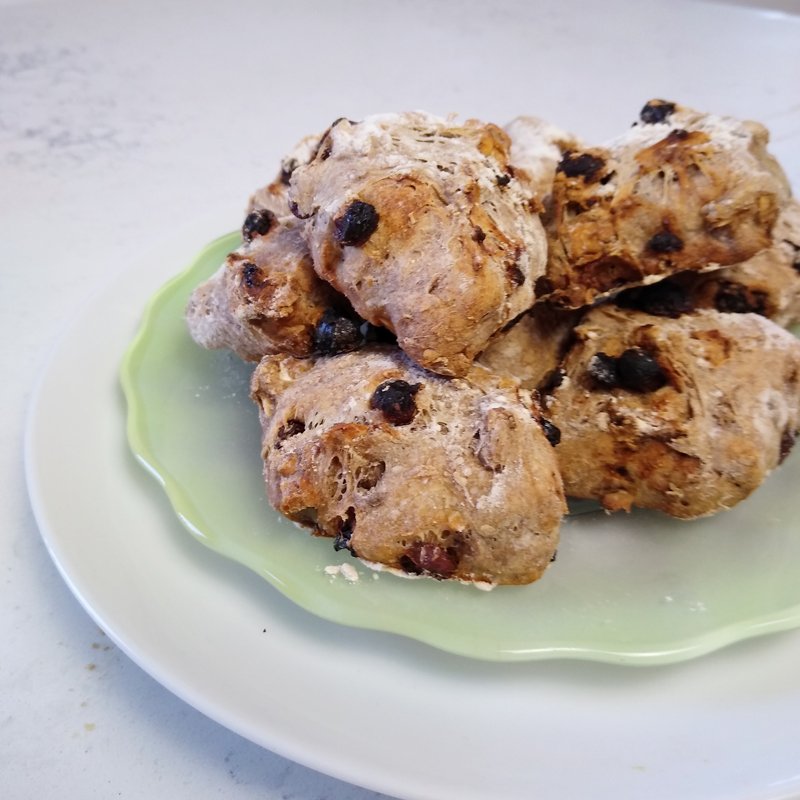 I went to school in Cambridge, MA in the 1990’s, and for a girl from Flushing, New York it felt like the gateway to the rest of the world. I loved flipping through the international magazines at the Harvard Square kiosk, looking in at the Italian linen clothes at Tess’s boutique, and browsing the neat shelves at Schoenhof’s foreign books. But I was poor, and mostly limited to wandering dreamily, hungry to become … something. (It was a long road to ending up on a farm!)

But I was also just hungry. I often stopped and bought a raisin roll from Cardullo’s, since they were affordable, delicious, and a little bit exotic.

Cardullo’s is a legendary  gourmet foods shop, in business for more than 70 years. On the counter they kept a basket of these chewy rolls, shaped like small potatoes, dense with nuts and dried fruit. They were pleasantly bitter where the fruit on the surface had burned.

I thought of them many times since then and put a recipe together that approximated my memory.  This uses part rye flour, part bread flour to get the right texture, and a generous amount of dried fruit and nuts to keep a wanderer’s energy up.

You will be preheating the oven to 420F (not yet though, there’s a long rise first). Use a baking stone if you have one, and have some parchment paper handy.

Stir the dry ingredients together in a big bowl. Then add the water and mix thoroughly into a dough. Cover the bowl with a dish towel and a plate, or whatever else you have to keep the dough cozy and protected, and let it rise for about 18 hours. It’s a heavy dough and doesn’t rise that much.

Start preheating the oven to 420F. Turn the dough out onto a floured surface. Form it into a rough rectangle, and divide it 3×4 into 12 rolls. You can put these on parchment paper. Let them rise for an hour or two.

Slip the rolls still on the parchment onto the baking stone. Bake for about 35 minutes, or until the fruit on the surface barely begins to burn and the bottoms are brown.